Hunting for the Health of It: Physical

Although the thermometer read 22 degrees, I stopped to peel off my sweatshirt from under my blaze orange coat. The half mile walk had raised my core temperature, and sweat, the ultimate enemy of prolonged comfort to a hunter, was preparing to counter the warmth. My fingers which stung from the bite of the air right through my gloves for the first 10 minutes of my hike, were now uncovered. The feeling of freedom, being so lightly covered now in such frigid conditions was more than just refreshing. The real sense of warm blood carrying heat to my fingertips which allowed them to function unprotected in the harsh elements created a feeling of genuine ruggedness and durability.

Of the various health benefits of hunting, the physical aspect is likely the most obvious. It comes in 2 forms: How we exercise our body and what we feed our body. I bet you can list a half-dozen ways that your chosen method of hunting can provide forms of exercise: the hike in, a push through the swamp, perhaps splitting some firewood, and hopefully dragging a deer at some point. Of course the hunting season is short-lived, and so will be the benefits derived from the exercise if your activity is limited to in-season adventures. Being physically prepared for hunting season makes it more enjoyable, and in some cases safer. Staying in shape during the rest of the year doesn’t have to be a chore. Biking, hiking, or jogging can be made more interesting, inspirational, and effective with the right music in your ear. I’ve put together a playlist of music that inspires me both as an outdoorsman and a teen of the 1980’s. I’m sharing it below for your consideration.

Recently a number of books have hit the market extolling the virtues of wild game. Michael Pollan may have gotten the discussion started with The Omnivore’s Dilemma. The term Locovore became the new word of the year in the Oxford American Dictionary in 2007. It refers to eating more sustainably for both your environment and your body. Steven Rinella has done his part as “The Meat Eater” to popularize a diet of wild meat as an author and TV personality. And now The Beginner’s Guide to Hunting Deer For Food by Jackson Landers is bringing in new hunters with an interest in pursuing a healthier lifestyle. I must say my proudest moment as a venison harvester was when my daughter complained after sampling her first sirloin steak that it was too soft and fatty.

Tomorrow it’s going to get emotional. 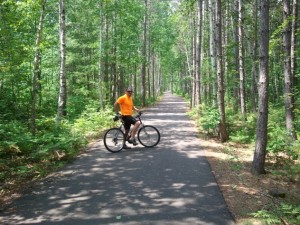 Hunter’s Workout Playlist
Most forms of hunting involve some degree of physical exertion. Being physically prepared for hunting season makes it more enjoyable, and in some cases safer. Getting in shape over the spring and summer doesn’t have to be a chore. Biking, hiking, or jogging can be made more interesting, inspirational, and effective with the right tunes in your ear. Here’s a playlist that works well for me. It’s an eclectic mix of movie soundtracks, classic rock, modern rock and pop, and country. You can search the web (or have a kid do it for you) to create this list which will keep you going for just over an hour.

Also sprach Zarathustra. Start out like you are about to embark on something significant. While you are getting your bike ready and accessories on, or lacing up for a run, this will set the tone. If you don’t recognize the title, you will recognize the song when you hear it.

I Gotta Feeling – Black-eyed Peas. Great pop song to infuse energy into the opening of your workout.

Chariots of Fire – Main Theme. Now it’s time to get focused. If you haven’t seen the movie, watch it. It may help to create the appropriate image and attitude in your mind. “God made me fast. And when I run, I feel his pleasure.” (quote from the movie)

The Buffalo Hunt – Dances With Wolves soundtrack. I did say this was a hunter’s playlist. It’s time to get into the hunting music. Once while on my bike, a deer ran alongside me in the ditch while this song was playing. It was just like the scene from the movie (replace my bike with a horse and the deer with a buffalo) and I shot an imaginary arrow at him. I smiled all the way home.

Fire Dance – Dances With Wolves soundtrack. As your body comes under stress and your mind starts to clear, it becomes easier to move into a spiritual state of mind. A workout can become meditation in motion, and this song will help take you there.

The Eagle and the Hawk – John Denver. At this point hopefully you are on a scenic stretch of road. The sensation of flying will be strong. If you are steady on your bike, it will be hard to resist spreading your arms like wings.

Fred Bear – Ted Nugent. Whether or not you agree with Ted’s political views or hunting style; he captures the spirit of the hunt masterfully with this tribute to the father of modern archery hunting. And the drummer’s high hat and rim shots are the perfect cadence for my running stride.

A New Game – Tom Hedden. It’s time to really bear down now and maximize your workout. Here’s another one you probably won’t recognize until you hear it. I’ll assume that if you’re an autumn enthusiast, you’re also a football fan. Used regularly by NFL Films, this song is the ultimate expression of physical exertion. But it’s short, so I play it twice to get a longer effect.

Gonna Fly Now – Theme from Rocky soundtrack. OK, maybe this song is the ultimate expression of physical exertion. But if you haven’t seen this movie either, you’ll need to watch it to benefit from the imagery of Rocky running the streets and steps of Philadelphia. This is the peak of the workout, so let this song help you push yourself.

Jump – Van Halen. As a teen of the 80’s, I’m a Van Halen fan (both the 80’s and 90’s versions). The rest of these songs are somewhat of a wind down, but still at a good pace. You may choose to replace these with songs that speak to you. These keep me going to the end:

The Eagle and the Hawk – John Denver. A revisit to an earlier favorite to begin the cool down.

Live Like You Were Dying – Tim McGraw. As you cool down, this song will help you think about how you’re going to spend the rest of your day in a meaningful way.

This entry was posted in WDNR, Wildlife and tagged Health, Hunt, SPECIES. Bookmark the permalink.