Hunting for the Health of It: Emotional 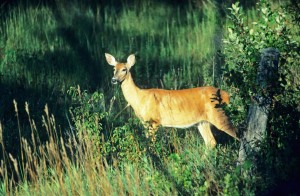 The memory of my first deer will always be special. It unexpectedly brought me to tears. It wasn’t simply an expression of remorse for the life I had just taken (although I do believe that was an appropriate component), rather a culmination of emotions topped off by how happy and proud I knew my Grandpa would be. But my second deer, a buck fawn, actually holds the top honor. It was the first year that I was hunting on my own. I wanted so badly to prove to my family that I was a capable hunter. I had hunted hard, missing only one weekday; and it was the last afternoon of the season. I went out one last time, mostly just to say I had given it my all. I spent most of the final hour leaning against a tree reliving the week and feeling sorry for myself. I even had an antlerless tag, and thought surely I’d at least get a chance at a doe or a fawn. There had been chances. I just screwed them up. The curtain was about to fall in 15 minutes on the 1987 season, when a deer sprang from the brush not 15 yards from where I had been standing the past 45 minutes! My aim was true and as I placed my hand on him, I said a prayer of thanksgiving. I’m surprised my seatbelt fit across my puffed out chest on the drive home.

It’s commonly assumed in the world of hunting that trophies are equivalent to large deer. But many trophies will be collected in the coming week that can’t be hung on a wall. They may be captured in a journal or simply burned into a memory. The real trophy of the hunt is the harvest of a good story. Few pursuits can generate the full spectrum from serene peace and tranquility to a heart-pounding adrenaline rush in the same morning; sometimes within the same hour. And the potential for experiencing a great sense of pride and accomplishment is made sweeter only because the possibilities of grave disappointment and sorrow are equally present.

Tomorrow my job is on the line!

This entry was posted in WDNR, Wildlife and tagged Health, Hunt, SPECIES. Bookmark the permalink.